The creation of the sound design for Skylight play at the Vancouver Playhouse. If you are interested in reading about additional feature articles, then click on the links for Music for Heaven, Do you hear the Rushing River ?, or Stella! in Black and White.

This play by British playwright David Hare was directed by Bill Dow for Vancouver Playhouse. It is essentially a two hander, a successful middle aged entrepreneur, Tom, and his ex mistress, Kyra, a school teacher living in a lower class district of London. The man’s 17 year old son appears at the beginning and end of the play. It all takes place in Kyra’s cluttered flat. 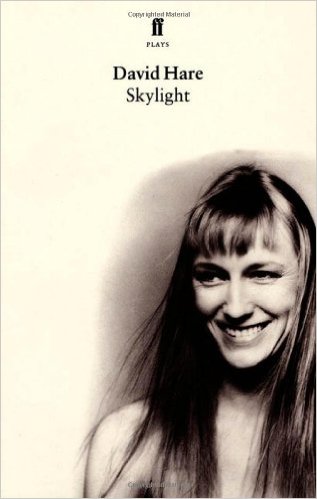 There was not much sound required for this production. Nonetheless the technical demands of this rather minimalist score were significant. The beginning of the play, Kyra’s entrance into her flat, used 8 stereo soundtracks overlapping or in close succession, all assigned to different speaker configurations in the theatre and on-stage. The playback system consisted of 5 audio sources: 3 minidisk players and 2 CD players.

The 8 soundtracks were preshow recording of piano partitas by J. S. Bach, rain, original score (sampled soprano sax and strings, synthesized piano), sounds of children playing, urban construction and traffic noises, an original song played through an on stage ghetto blaster, a rap song by Beck, and finally bath water running. There were a number of challenges in making this montage performable by the sound operator. Each of the elements needed to be executed separately to sync with actions and light cues. There was also a simulated rainfall upstage.

Such complexity is not untypical in theatrical productions, although it is wise to keep everything as simple as possible without losing flexibility.

From my point of view one of the most interesting aspects of the soundscape was the production of the original song mentioned above. Bill Dow felt that the singing of a boy soprano would greatly enhance the tone of the play. The plan was to use it at the beginning of the play and at the very end. Both times it is heard through the ghetto blaster on-stage which is activated by Kyra. At the end of the play the sound moves from the blaster into all the theatre speakers as the lights on the actors fade to black and into the curtain call. We wanted to create with the song a sense of purity, innocence and youth. For text I chose Tyger by William Blake. I only used the first two stanzas, repeating the first as a chorus.

The first problem was to find the singer and record his performance. Another problem was to add orchestration to the singing. Partly because of budgetary limitations I decided to record the singer a capella, on location. The boy was found through Gerald Van Wyck, musical director of the B.C. Boys’ Choir. He introduced me to Justin Morisette, age 11, and with Gerald’s excellent coaching I was able to record a performance of the song. It was done at West Vancouver United Church which fortunately has superb acoustics for our purpose. In addition to a performance of the song I also had Justin sing single sustained tones using the G major scale. Justin had 2 days to prepare for the recording and it took us about an hour to accomplish it. I used a portable Tascam DAT recorder and a single Audiovox large diaphragm microphone.

The vocals were then transferred to computer where I edited the final version of the a capella song. I also took the single tones and transferred them to a sampler thus enabling me to ?play? Justin’s voice from a keyboard. The tricky part came in trying to orchestrate this. Fortunately the vocal performance was metrical enough that I was able to reconstruct a metronome part via MIDI. Although it was rather rubato in nature I now had a basis for adding other parts to the vocal. These consisted of orchestral string samples, sustained tones of Justin’s voice and piano arpeggios. These latter in particular would not have been possible without the metronome track.

Review of Savitri and Sam by Leslie Barcza
November 6, 2013
Go to Top